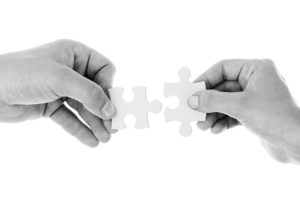 This is one of the tools as a hypnotherapist I use a lot because it gets good results across the board for a range of problems and issues. So what is parts therapy?

Parts therapy is a tool in which the therapist can gain access to the unconscious parts of the mind by way of relaxing the client and taking them into hypnosis. As the client goes into hypnosis the unconscious mind sometimes wants to communicate to the therapists or will allow the therapist to negotiate a better outcome for the client. We can gain communication with the part by either asking it to signal yes or no using a finger on either hand; this is called ideo motor movements. In some cases I can get vocal agreement as well but this is not as common as getting some form of movement.

Our unconscious is there to help and protect us, and through this mechanism the unconscious sets up specific ‘parts’ to deal with trauma or special needs the individual may require. It is the nature of the mind to be subdivided into a number of ‘parts’. The intention of each ‘part’. There are no ‘bad’ parts and the goal of Parts Therapy is not to eliminate ‘parts,’ but instead to help find positive roles or behaviours also called jobs.

This will not be a conscious movement by the client in fact most of the time they will not be aware of their finger moving during the session. We can ask the part if it would be prepared to take on a better behaviour or if it would like to help the client by changing an outdated program. Sometimes this is straight forward but other times it can take a while to get the part to agree to a different outcome that it is happy about. There are other occasions that the part doesn’t know it is running an out dated program because it has worked for the client so far, but as we change from children to adults we often can take outdated behaviours with us and this is because they may have been protecting the client it someway. Our unconscious mind is there to protect us.

We can also get a part to talk to us via the client’s voice box or move a body part, for example the shoulders instead of the fingers, even open the client’s eyes. This is a very powerful tool that can help clients though all sorts of problems in life and one which I have had some amazing results helping clients make life changing progress even after just one session.

The part sometimes doesn’t want to talk or communicate at all and I’ve sometime got no response at all so I simply ask the part to let the client know somehow that it is present.

I’ve seen one client move violently and almost thrown from the chair, the client didn’t even know it had happened during the session. It can be quite upsetting if a client brings a partner into the therapy room during a session and I’ve had to ask them to sit down and let the session continue or leave the room on more than one occasion as they didn’t understand what was going on. I know it was them wanting to stop or protect their partners. In fact this was only the mind processing trauma, but they wouldn’t have known that. I now explain this away from the client before I allow partners in my therapy room if I suspect this may happen, it easier for them and me!